DDoS Hide & Seek: On the Effectiveness of a Booter Services Takedown

Daniel Kopp is a member of the DE-CIX Research and Development team since 2015. He participates in several national and international research activities, such as EU or federal funded projects. His research interests are Internet and network measurements, as well as Internet and computer security. He actively contributes to the Internet and networking community (e.g., RIPE, NANOG, DENOG), and is also involved in standardization activities (IETF). Prior to his work at DE-CIX he collected relevant experience for over 8 years in the industry and received his M.Sc. in 2015.

In this article, we investigated booter-based DDoS attacks in the wild and the impact of an FBI takedown targeting fifteen booter websites in December 2018. We investigated and compared attack properties of multiple booter services by launching DDoS attacks against our own infrastructure. To understand spatial and temporal trends of the DDoS traffic originating from booters, we scrutinised five months worth of inter-domain traffic.

Booter services continue to provide popular DDoS-as-a-service platforms and enable anyone irrespective of their technical ability, to execute DDoS attacks with devastating impact. Since booters are a serious threat to Internet operations and can cause significant financial and reputational damage, they also draw the attention of law enforcement agencies and related counter activities.

We took a victim perspective to study the potential damage that booter-based DDoS attacks can directly cause to their targets and the collateral damage to Internet infrastructure caused by carrying attack traffic. We did so by purchasing different services from four popular booters to attack our dedicated measurement infrastructure at an IXP between April and September 2018. This provided us with a unique picture of current booter service capabilities in the wild.

Figure 1 shows the results of ten self-attacks on our measurement platform from booter services. We learned that NTP amplification attacks are the most potent attacks delivered by the booters included in our tests. Depending on the protocol used for amplification, we observed that most booter attacks utilise between ∼100 and ∼1000 reflectors distributed over 20–55 peer ASes. When we studied how the attack traffic is handed over to our AS, we learned that, for NTP, the majority of the traffic (80.81%) is delivered by our transit provider, whereas in our measurements for Memcached we experience almost the opposite, with 88.59% transferred via the IXP peering.

Booter services advertise higher-priced premium services. For our exemplary booter service, VIP offerings charge 178.84 USD compared to 19.83 USD and promise higher attack traffic rates of 80–100 Gbps instead of 8–12 Gbps for non-VIP services. We validated this claim and launched two VIP attacks. Figure 2 shows that the NTP (blue line) and Memcached (red line) attacks generated traffic rates with a peak of about 20 Gbps and 10 Gbps, respectively. This is roughly 25% of the traffic rate compared to that which was advertised. 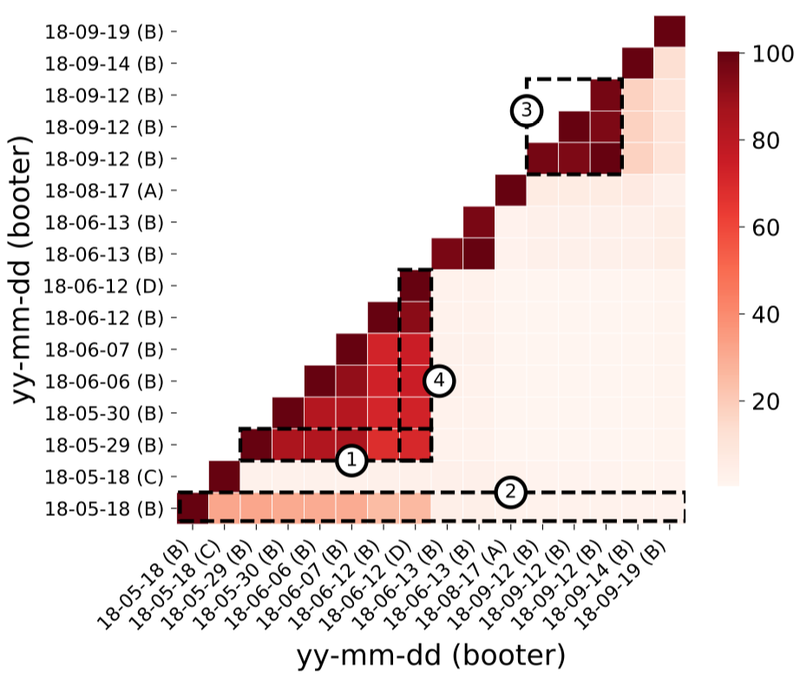 We observed that it's impossible to identify specific booter services by using the insight on the utilised amplifiers from another point in time.

NTP Amplification Traffic and DDoS Attacks in the Wild

We took a closer look at NTP DDoS amplification traffic at our vantage points: a Tier-1 ISP, a Tier-2 ISP and an IXP. From our self attacks we observed amplified NTP packets to have a size of either 486 or 490 bytes (98.62% over all observed packets) due to NTP monlist requests. Figure 4 shows the distribution of NTP packet sizes at the IXP. We observed an almost bimodal distribution of 54% of the NTP packets that are smaller than 200 bytes (likely benign traffic) and 46% that are larger (likely attack traffic). Thus, we define a threshold of 200 bytes as an optimistic classification criterion towards the detection of DDoS attack traffic.

By applying our classification, we found 36k destinations at the Tier-1 ISP within three weeks, 95k at the Tier-2 ISP over four and a half months and 244k destinations over three months at the IXP. Figure 5 shows the size of the traffic levels towards individual targets in combination with the number of unique NTP traffic sources. The majority of traffic rates are between 5 and 100 Gbps (avg. 2.64 Gbps) and 224 victims received more than 100 Gbps. From our self-attack approach we learned that in the case of NTP DDoS attacks, the traffic rates observed at the IXP are probably underestimated as most traffic within NTP attacks is not transmitted via the IXP.

Takedown of 15 Booters and Effects on Inter-Domain Traffic

On 19 December 2018 the FBI seized the domains of fifteen booter websites (e.g., critical-boot.com or quantumstress.net). Smaller seizures of single booter domains had occurred previously, such as the seizure of web-stresser.org with more than 138k registered users by investigators in the U.S., U.K. and the Netherlands in 2018. Beyond domain seizures, booter users and operators can face legal actions: the operator of Titanium Stresser was sentenced to two years in prison in 2017.

Within our study we focused on answering the question - did the takedown at the end of 2018 result in a significant reduction in DDoS attack traffic?

Before we took a look into the traffic aspects of the takedown, we analysed the available booter domains. We observed the .com/.net/.org domains for over a year and identified booter websites by keyword matching. By this strategy we identified 58 booter domains by manually visiting and verifying each domain matching the keyword search.

By observing the booter domains over time, we identified a new domain for a seized booter service that became active after the takedown and entered the global Alexa Top 1M list just three days after the seizure of their old domain. The new domain was already registered beforehand but remained unused until the takedown. We learned that despite the seizure of fifteen domains, many alternative booter sites exist and seizing the front-end of booter services does not improve the situation for DDoS victims, as the underlying infrastructure of reflectors probably remains online and can be utilised without disruption.

For studying any effects on traffic patterns of the seizure of the fifteen booter services at our vantage points, we did a time series analysis, spanning 122 days over the seizure of the domains on 19 December 2018. We investigated any combination of suspicious protocol ports (NTP, Memcached, DNS, etc.) as source or destination port (to or from reflectors) for ingress and egress traffic. 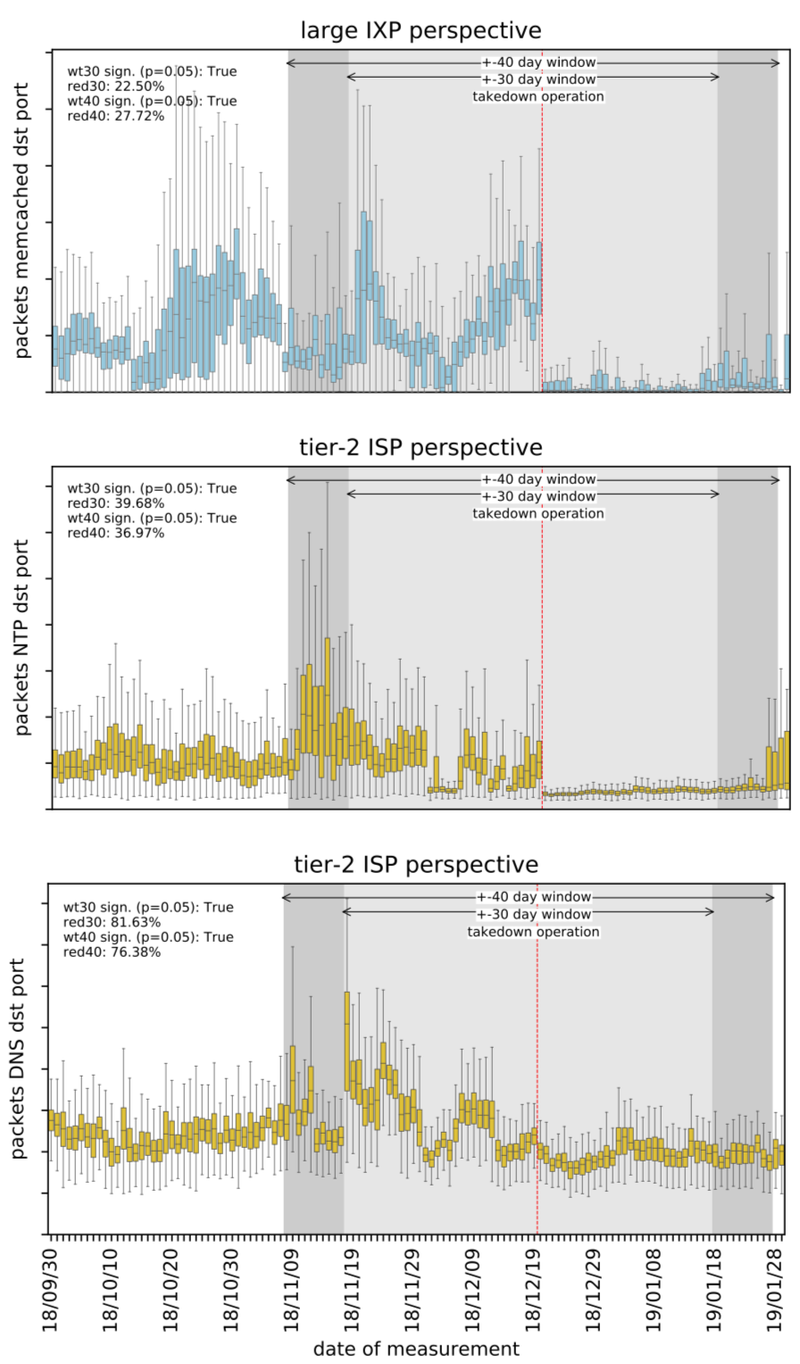 Figure 6: Selected significant changes in traffic before and after the takedown

The traffic patterns we observed show a correlation with the FBI seizure. We found significant reductions in DDoS traffic to possible DNS, NTP, and Memcached reflectors around the takedown operation (Figure 6). Nevertheless, we could not find any significant reduction in traffic from reflectors to victims. To exclude false positives, we used more reliable filters for NTP DDoS learned from our self-attacks and measured the number of NTP DDoS attacks over time (Figure 7), which show no significant reduction after the takedown. Again, we conclude that seizing the front-end of booter services does not improve the situation for DDoS victims, as the underlying infrastructure of reflectors remains online and can be utilised by third-parties without disruption. 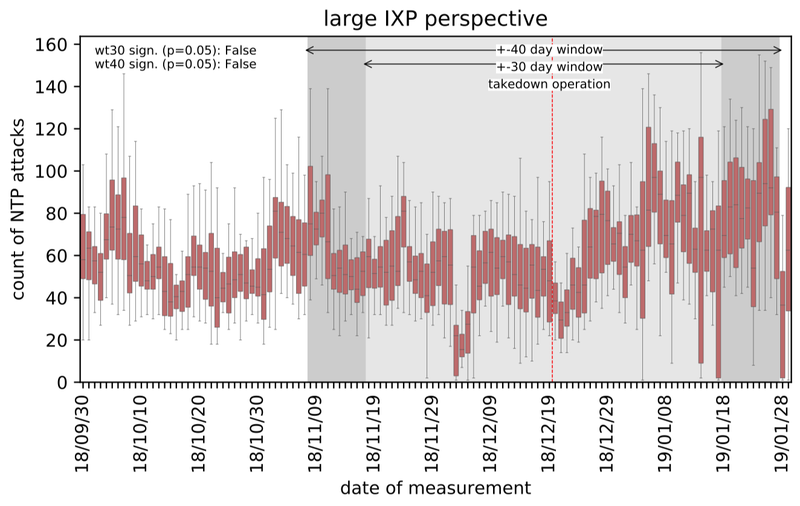 We investigated the effect of booter-based DDoS attacks through the lens of a major IXP, a tier-1 ISP, and a tier-2 ISP, with a focus on the effects of an FBI takedown of 15 booter websites in December 2018. By purchasing attacks against our own infrastructure from four popular booters, we learned the booter capabilities. The attack traffic levels generated by cheaper non-VIP services are considerably higher, with up to 20 Gbps for a NTP DDoS attack, than previously reported. In our data sets, we observed NTP-based DDoS attack traffic to be prevalent at all three vantage points. The attacks observed involve substantial traffic rates of up to 600 Gbps during our observation period.

To study if booter takedowns of law enforcement agencies help to reduce the attack traffic, we analysed the effect of the FBI-led mass-seizure of 15 booter domains on NTP, DNS, and Memcached-based DDoS attacks. We noticed that the takedown immediately had an effect on the DDoS amplification traffic especially towards reflectors. However, it did not have any significant effect on DDoS traffic hitting victims or on the number of attacks observed. We found at least one booter to become active under a new domain shortly after the seizure, while the number of booter service domains in total increased over the measurement period despite the seizure.

Our study aims to inform network operators to better understand the current threat-level and characteristics, but also for law enforcement agencies to recognise the need of additional efforts to shut down or mitigate open reflectors. Since our study is limited to technical parameters, the question arises whether this is sufficient to assess the health of the booter ecosystem. This motivates the need to better study the effects of law enforcement on the booter economy, that means on infrastructures, financing, or involved entities.

This research was presented at RIPE 80.

The full paper was published at the ACM Internet Measurement Conference (IMC) 2019.

Daniel Kopp is a member of the DE-CIX Research and Development team since 2015. He participates in several national and international research activities, such as EU or federal funded projects. His research interests are Internet and network measurements, as well as Internet and computer security. He actively contributes to the Internet and networking community (e.g., RIPE, NANOG, DENOG), and is also involved in standardization activities (IETF). Prior to his work at DE-CIX he collected relevant experience for over 8 years in the industry and received his M.Sc. in 2015.