I am involved in policy research on Internet development as GNKS Consult, and I am Director on the Board of the Public Interest Registry (.ORG). I have learned to appreciate the RIPE NCC research and debate on topics relating to the Internet that matter.

Having evaluated the outcomes of the EU IPv6 Deployment Survey and presented them at various meetings during the past few weeks, I was curious to find out if the outcomes would be different when asking the same questions to the RIPE community. 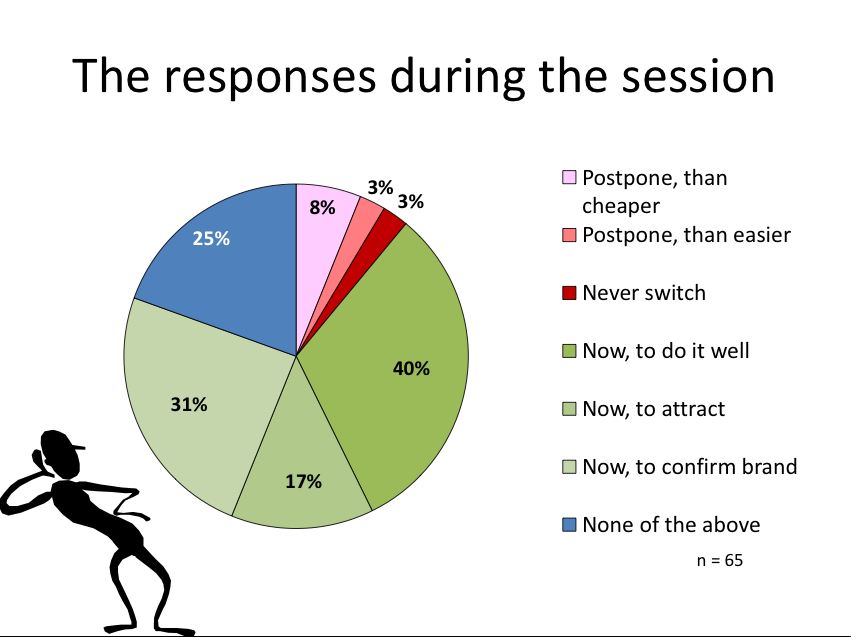 Having evaluated the outcomes of the EU IPv6 Deployment Survey and presented them at various meetings during the past few weeks, I was curious to find out if the outcomes would be different when asking the same questions to the RIPE community. I was happy then, to have the opportunity to chair a panel discussion and conduct a live survey during the IPv6 Working Group session at the RIPE 59 Meeting in Lisbon.


Gert Döring, Geoff Huston and Kurtis Lindqvist kindly offered to sit on the panel and contribute to the discussion. By way of introduction, Gert asked the audience to consider what kind of Internet people want to have in five years. Geoff even questioned whether the IPv6 transition is an example of market failure. Kurtis, however, said that based on his own experience with IPv6, a slow and gradual implementation has been very beneficial.

The first question I posed to the audience was: "What would you gain by postponing, and what would you gain by stepping up to the plate, earlier rather than later?” Around 60 people participated in the poll. Most said by stepping up to the plate now it allows them more time to do a gradual, well thought through transition, and to demonstrate that their organization is “state-of-the-art”.

I then asked what are the biggest hurdles preventing people from deploying IPv6 right now. A large percentage of voters (47%) did not choose one particular reason presented in the poll and some said the options given in the survey were too extreme. Others said there is not enough customer demand to justify the extra expenses to management and that there is still not enough vendor support. Geoff responded to that, noting that any vendor is willing to deliver what the customers want, but only if those customers are willing to pay for it (some people mentioned that vendors have started to charge extra for IPv6 support since they realized there is a market out there). However, the costs don’t seem to be primarily in the hardware – the backbone has been running IPv6 for years - but more in customer support.

Overall, people felt that the problems with IPv6 are less extreme today and that the situation is slowly improving. The transition is technically possible today and the capital needed is not prohibitively large anymore.

Next, I asked the audience how important IPv6 deployment is for their organization. Many responded that the deployment of IPv6 will be unavoidable for their organisation in due time, and that technically, everything is in place to deploy IPv6 today.

Geoff commented that openness is the key, and IPv6 is the only way to guarantee that. Kurtis added that he was surprised that many people responded, "I will deploy in due time", because “due time” is pretty close. Geoff restated that the market really is well informed, and that this situation is intentional to maximize share holder profits at large corporations.

There seems to be a knowledge gap between the engineers in an organisation and the CEO or CFO. While most engineers are well-informed and ready to deploy IPv6, it is hard to convince their CFO to invest in something that might only really become relevant in two years. That is beyond normal business planning horizons, as many focus on survival (and return to stakeholders) during the coming year.

Finally, I showed some of the actions the EU is planning to implement and asked the audience which ones they think would make a difference. Most people said that encouraging content providers and providing IPv6 accessibility to regular content, services, and applications would be helpful. But also governments deploying IPv6 more widely in their networks would make a difference, demonstrate the importance of IPv6 deployment and encourage others.

The panelists concluded that governments can play an important role in getting companies to look beyond their short-term business interests, as deploying IPv6 is a real public interest matter today. The general feeling in the audience was that the industry needs to stop talking and start moving packets. In fact, I think we already see that today many ISPs and ICT companies are truly looking into "how to deploy IPv6" and "what would it take", but that a true move towards IPv6 deployment is still waiting on a more urgent push.

Next to this insight, it was good to experience the willingness of the RIPE Meeting participants to look at this with a true mix of technological insight and policy arguments. In this way, the arguments that are put on the table will be useful to everyone that needs to convince policy makers and CEOs. The main findings are:

The full results of the survey taken during the panel session can be found here:
http://www.ripe.net/ripe/meetings/ripe-59/presentations/botterman-panel-discussion-results.pdf

The outcomes of the EU IPv6 Deployment Survey can be found here:
http://www.ripe.net/ripe/meetings/ripe-59/presentations/botterman-v6-survey.pdf

I am involved in policy research on Internet development as GNKS Consult, and I am Director on the Board of the Public Interest Registry (.ORG). I have learned to appreciate the RIPE NCC research and debate on topics relating to the Internet that matter.