The Shape of a BGP Update

What happens to BGP traffic when an announcement or withdrawal of an address prefix propagates through the Internet? See below some interesting graphs and observations.

What happens when an IP address prefix gets announced or withdrawn. How does this information propagate through the Internet? And how does it affect the amount of BGP traffic across the Internet when a single prefix is freshly announced or withdrawn from the global routing table? This is not going to be surprising for any BGP expert. The intent of this story is to provide some general intuition about the current state of BGP routing in practice.

The prefix 84.205.67.0/24 was not visible in the routing table on 2 February 2011 at 08:00 UTC. At that point it was announced in BGP to all 61 of our local directly connected peers via our Routing Information Service (RIS) Route Collector present at the Amsterdam Internet Exchange AMS-IX.

Two hours later, at 10:00 UTC, the same prefix was actively withdrawn via the same set of peers at AMS-IX.

We measured the BGP update traffic that was generated by these two events from all of the RIS collectors by observing the incoming updates via 90 full table peers across the globe.

The prefix 84.205.67.0/24 is part of the set of RIS beacons that have periodical and pre-determined patterns of announcements and withdrawals. Find more at: http://www.ripe.net/data-tools/stats/ris/current-ris-routing-beacons

For the prefix announcement occurring at 08:00 UTC, Figure 1 below represents the update activity (BGP updates per second) observed over time, as well as the visibility progress of the prefix (the number of peers seeing it).

The 0 seconds at the X axis marks the moment the prefix got announced.

The visibility is calculated by dividing the number of peers already seeing the prefix by all the peers in the set (90).

For the BGP updates we differentiate between (1) the first update ever sent by a peer regarding this event and (2) further updates from a peer that has already seen the event. This allows us to distinguish between updates that represent the first time they are seen by a peer, and updates that most likely represent route selection (AS path convergence, etc). 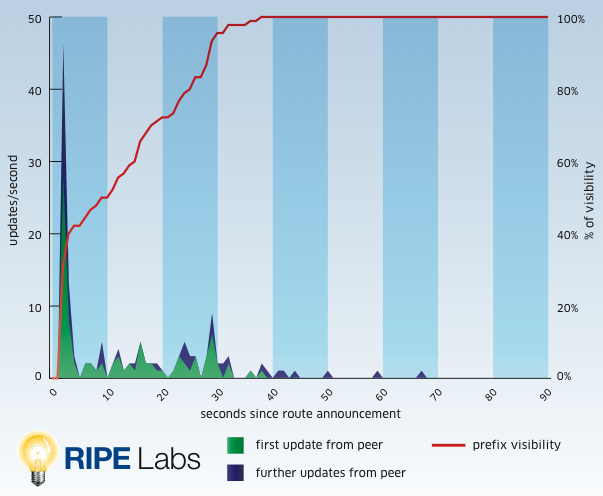 We observe that all of the generated BGP traffic for this announcement occurs in slightly over a minute after the initial prefix announcement, with 90% of the volume occurring in the first 30 seconds. Full visibility (100%) by all peers has been reached after only 38 seconds. A visibility of 40% is accomplished in just a few seconds.

Nearly half of the updates (46%) are further updates from peers, representing the overhead of the BGP convergence.

Figure 2 below shows the BGP update volume for the prefix withdrawal that occurred at 10:00 UTC. Here we distinguish between the update messages per type: announcement or withdrawal. For visual clarity, withdrawals are represented on the negative side of the Y axis. As before, both types are separated between first and further updates as seen by a peer. 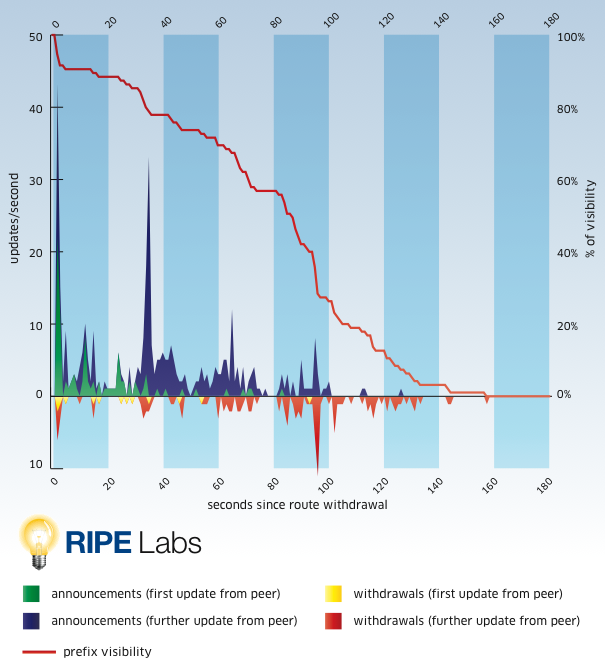 It is interesting to note that the generated volume of traffic for the prefix withdrawal is much higher than for the announcement of the same prefix. Almost 4 times more BGP update messages (503 versus 139) are registered. Also, the activity lasts for nearly 3 minutes as compared to just over a minute for the prefix announcement.

79% of all updates are further updates from a peer. This indicates that on average a route withdrawal will generate about 5 BGP messages sent by a peer, as compared to only 1 or 2 messages for a route announcement.

Note that only 2.6% of the update messages will be concerning a peer that receives the withdrawal for the first time and immediately passes it on to its peers.

The distribution of the BGP traffic per update message type for the whole period is shown below in Figure 3. 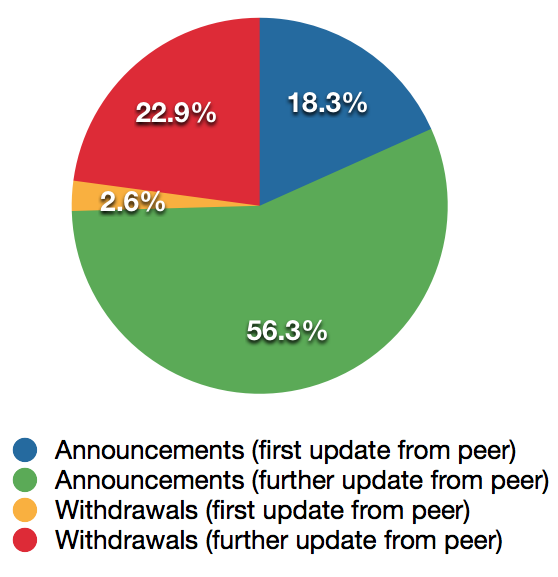 This phenomenon of the much larger volume of updates, with multiple update messages from each peer can be explained by the way routers interpret a route withdrawal: A router has no way of knowing if a route withdrawal is happening because it was withdrawn at the origin, or because its peer simply dropped the route due to connectivity loss or other malfunction. Therefore, following the resilient nature of the Internet, it will look in its routing table for an alternative path towards the withdrawn prefix and try to save the connection to the prefix in that way. If it succeeds, it will pass the update to its peers, therefore prolonging the life of the route. Only when it runs out of alternative paths, will it finally remove the prefix from its routing table and send the withdrawal message to its peers.

To conclude, we observe that BGP route updates tend to converge globally in just a few minutes. The propagation of newly announced prefixes happens almost instantaneously, reaching 50% visibility in just under 10 seconds, revealing a highly responsive global system. Prefix withdrawals take longer to converge and generate nearly 4 times more BGP traffic, with the visibility dropping below 10% only after approximately 2 minutes.

Keeping all this in mind, we can conclude that it is often easier and quicker to turn on a prefix, than to switch it off.

Vasco Asturiano Based in Amsterdam, NL

It made me wonder if there is any significant difference between the announced IPv4 and IPv6 beacons. Any plans on repeating the analysis and publishing the results for any of the IPv6 beacons?<br /><br />Thanks in advance!

Hi I&ntilde;igo,<br /><br />Thanks for your suggestion. We didn't look deeply into the behavior of IPv6 prefixes, but they show a similar pattern of updates when announcing or withdrawing, with perhaps a slightly shorter convergence time. No other remarkable differences were noticed at first glance but a deeper analysis might reveal further insight.<br />We'll consider a follow up on this subject to run a comparison analysis of how the behavior compares with IPv4.<br /><br />Thanks,<br />Vasco

I just wanted to thank you for posting this article. You provided extremely useful information that is hard, if not impossible, to find. Thank you! Eric

Question - do you anticipate the same convergence timing if a route is withdrawn from one ASN and subsequently advertised on a different ASN? Eric

Hi Eric, Thanks for your comment. We haven't investigated that specific case, therefore we can only speculate. If the announcement of the second ASn would happen after the prefix was completely withdrawn, then most likely the model would be the same as portrayed above. However, if the second ASn announcement takes place before the withdrawal process finishes, one could expect some degree of cross-influencing, and would not be surprising to find that the total number of BGP messages would be less. And probably a shorter convergence time. How much, remains to be measured in a real-case experiment. Thanks, Vasco

Thanks Vasco! I just wanted to let you know that we performed this procedure yesterday by withdrawing the route with the old ASN, waiting 5 minutes, then announcing the route with the new ASN, and the BGP updates were received throughout the Internet almost immediately. The withdrawal was seen within about 25 seconds at all locations we checked, some within 5 seconds. The announcement was just as fast, if not faster. So, it appears that the convergence time was extremely fast and we had very little disruption. We probably could have avoided waiting the 5 minutes, but we wanted to be sure all routers had withdrawn the route prior to advertising. If we had not waited 5 minutes, the entire process could have taken less than 1 minute. Not bad! Eric

Great info, hope this question is still seen on this older article. If a /24 prefix is multi-homed over 2 ISPs, both links going into a single router, how long should we expect the updates/convergence time to be in the event of a single link or ISP failure? My thoughts were that advertisement of a new prefix or removal of that prefix is a different situation than a multi-homed setup and failure of the primary link. If the server is in New York, I assume failure of the link would be found out later in Japan vs within the USA. Or do all the routers already know the primary and backup way to get to a prefix already? Best path and 2nd best path? Thank you!

Hi Fred. I think it all depends on your specific situation: How are your upstreams connected, are you using a primary/backup config between your upstreams or not, etc. If you had a case of link failure to an upstream, the specifics for your situation should be visible in the data that RIS collected, and can be visualised with BGPlay in RIPEstat ( https://stat.ripe.net/widget/bgplay ). In BGP traditionally only the best path gets distributed to peers, but there is an extension (ADD_PATH) that allows for multiple paths to be sent to peers. I have no data on how widespread ADD_PATH usage is at the moment.