Based in FORTH-ICS, Heraklion, Greece

I work as a research engineer in INSPIRE group in FORTH-ICS. My research interests primarily include Internet routing, Internet topology and network security. My main target is to better understand how the Internet ecosystem evolves, improve the transparency of the Internet with respect to the paths (i.e. AS-, IXP-, Facility- level) the data go through and evaluate network performance under security constraints. To that end, I organise and deploy advanced networking measurements and simulations, using also analytical tools like graph theoretic approaches, social-driven heuristics and modeling traffic characteristics.

traIXroute is a tool that detects whether and where a traceroute path crosses an Internet Exchange Point (IXP). It uses data from multiple sources and advanced criteria to verify IXP crossings to deal with problems due to replies from third-party interfaces or inaccuracies in the available data about IP addresses assigned to IXPs. These problems can mislead simple heuristics, based solely on the IP address prefixes allocated to IXPs, for the inference of IXP crossings.

“Is observing an IP address from an IXP prefix sufficient evidence to conclude that a traceroute path crossed an IXP?”

Taking into account that (i) routers can reply to traceroute probes with third-party IP addresses from IXP subnets; (ii) the available IXP IP address prefix data may be inaccurate; and (iii) IXPs could use allocated addresses not only in the IXP subnet but also in other operational subnets, the answer to the question above should be negative. 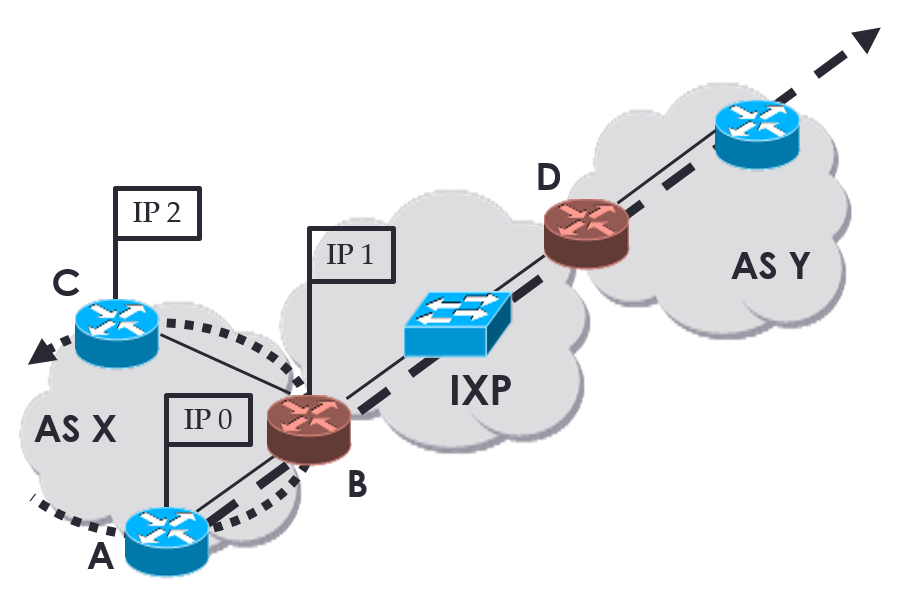 Figure 1: An IXP fabric connected to two ASes. The dashed path crosses the IXP, while the dotted path does not cross the IXP, although it can yield an IXP address in traceroute replies.

1. IXP membership data : triplets of the form {IP address → IXP Name, ASN} retrieved from the PDB and PCH that provide 1) the exact IP addresses of router interfaces connected to the IXP network; and 2) the ASes that these routers belong to. This information maps an IXP IP address to its AS.

3. Route Views Prefix to AS mapping dataset : tuplets of the form {IP prefix → AS} provided by CAIDA based on data from Route Views. This data specifies which IP prefixes are associated with which ASes. They are used to map IPv4 addresses to ASNs.

traIXroute detects and identifies at which hop an IXP is crossed in traceroute paths, following a three-step process that exploits the available information in the three datasets. Using a sliding window of one or two hops on traceroute paths, the tool applies the following steps to infer an IXP crossing:

Step 1: It detects IXP IPs in traceroute paths based on IXP membership triplets or  IXP prefixes.

Step 2: It resolves IP addresses to ASes and checks the IXP membership of the ASes adjacent to the observed IXP address(es).

To evaluate our methodology, we used 31.8 million traceroute paths collected from  CAIDA’s ARK measurement infrastructure in January 2015. We applied our IXP detection rules and made the following interesting observations (among others [1]):

Trying to answer what we can learn about IXPs in traceroute paths using traIXroute, we found that in the used traceroute dataset from CAIDA:

As a next step, we analysed: 1) which IXPs attract the most paths; and 2) how the number of paths an IXP attracts compares with the number of their member ASes.

Figure 2 shows a scatter plot of the number of AS members per IXP versus the number of paths that cross the IXP. We see that  the top three IXPs in terms of paths are located in Europe: AMS-IX, LINX and DE-CIX. However, they are close to the 95th-percentile confidence intervals, which means that compared to the average, they have more members than paths. In contrast, many US IXPs (shown with brown colour) have more paths than their number of members indicates. 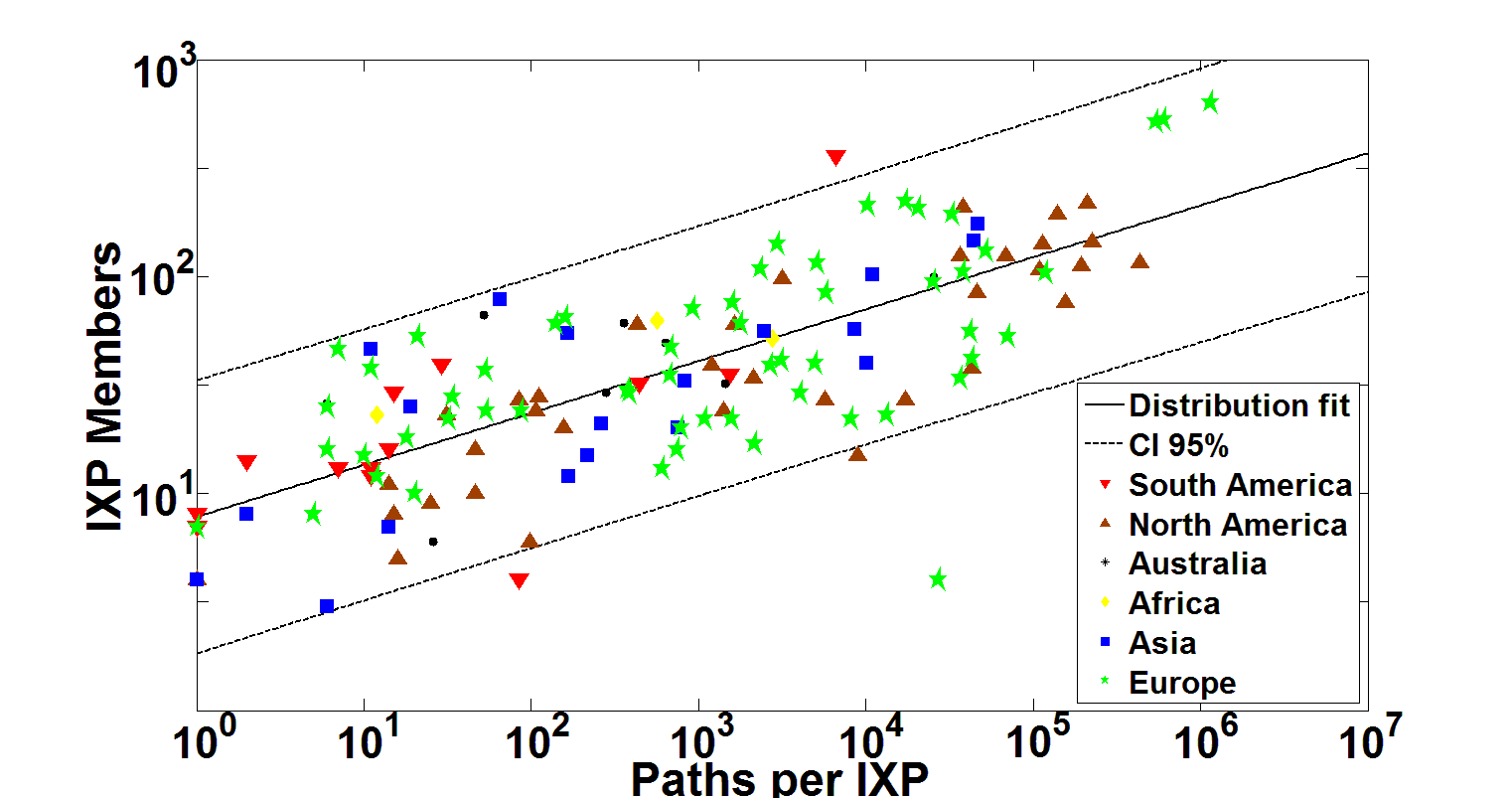 Figure 2: Scatter plot of number of AS members vs. number of paths per IXP along with fitted line and 95% confidence intervals. IXPs are grouped by continent.  The correlation coefficient between the number of IXP members and IXP paths is 0.8.

traIXroute is a Python 3 tool following a modular design that offers full customisation for users and can be easily extended with new IXP detection rules. In the background, traIXroute uses the standard traceroute tool or the scamper tool [2], which implements the Paris traceroute technique to deal with inaccurate paths due to load balancers [3].

Besides the flexibility to choose between scamper and traceroute, the tool also offers a new dataset with IXP membership and prefixes data after merging the PDB and PCH databases, which can be updated automatically from the command line. For merging, it uses heuristics to avoid artifacts due to inconsistent IXP identifiers in the two databases.

Another advantage of traIXroute is that a user can import .json files containing external traceroute measurements. This drastically limits the workload of the tool since no probing has to be performed.

Internet users, network operators, and researchers would benefit from knowing which IXPs packets go through. To help achieve this goal, traIXroute is available here [4]. All the necessary information to download, install, and use traIXroute can be found on the website. The first version (1.0) of traIXroute was released in May 2016.

traIXroute was used in the RIPE Atlas hackathon that took place in Copenhagen in May 2016. One hackathon team integrated traIXroute with the IXP Country Jedi project, which maps and visualises the use of IXPs in different countries. The team used traIXroute to more accurately infer IXP crossings. We are continuing this collaboration and are planning further improvements to the IXP Country Jedi project. Watch this space for updates!

[2] Luckie, M.: Scamper: a scalable and extensible packet prober for active measurement of the internet. In: Proc. ACM IMC (2010)

I work as a research engineer in INSPIRE group in FORTH-ICS. My research interests primarily include Internet routing, Internet topology and network security. My main target is to better understand how the Internet ecosystem evolves, improve the transparency of the Internet with respect to the paths (i.e. AS-, IXP-, Facility- level) the data go through and evaluate network performance under security constraints. To that end, I organise and deploy advanced networking measurements and simulations, using also analytical tools like graph theoretic approaches, social-driven heuristics and modeling traffic characteristics.

George, thanks for the information. It looks like a cool tool. -- www.BGP.pl www.Lipowski.org