Last week we published a proposal for new organizational layers in order to be more effective in fighting spam. In this article we describe planned experiments to determine the effects of outbound spam reputation on Internet organizations.

In our previous RIPE Labs post, we proposed new Internet Cloud Layers for Economic Incentives for Internet Security . We stated that:

These layers can bring quantification and experimental rigor to a commons model of the Internet, while providing the reputational and economic motivation needed to organize IT security to defeat the spam and botnet black market.

This time we describe some specific planned experiments to determine the effects of outbound spam reputation on Internet organizations. First, some background on the current state of Internet economic externalities, a dive fifty years into the past for the origins of social comparison theory, and then the experiments.

Currently E-Mail Service Providers (ESPs) have no direct incentive to control spam that may originate from their network and impact others. They consider it an economic externality; somebody else's problem. ESPs' investments are usually prompted by the incentive to provide better service for their own customers, or sometimes not even that:

“Businesses put their profits above defending their customers and business partners.” ( Herzog2010 )

Internet security professionals are starting to recognize that security metrics are required to replace fear, uncertainty, and doubt in the Internet ( Jaquith2007 ), but to date while metrics have been deployed extensively within organizations ( Seiersen2010 ), the ignored elephant in the room remains “the necessity of comparative analytics” across organizations ( Hutton2010 ).

Fifty years of social science research and literature indicates that making behavior public changes that behavior ( Festinger1954 ). People actually do care how well they are doing compared to similar people, and if they are given a way to accurately make such comparisons, they tend to act on them.

“When given outcome information about the average user's net benefit score, above-average users mainly engage in activities that help others. Our findings suggest that effective personalized social information can increase the level of public goods provision.”

“... when bidders view a product listing at an online auction site, for example, they may not have easy access to information regarding the true quality of the product and therefore may be unable to judge product quality prior to purchase ( Fung and Lee 1999 ). The difference between the information buyers and sellers possess is referred to as information asymmetry.”

Developing trust through reputation does more than just facilitate an auction market in general; it provides advantages for trusted sellers:

“To promote trust and reduce opportunism in the electronic market, credible signals should be provided to differentiate among sellers and give them incentives to be trustworthy.”

Reputation turns cheap talk into useful market signals. That particular research was in online auctions, in which the buyers and sellers may be individuals. Applying the same kind of reputational transparency to Internet organizations should affect organizational behavior similarly.

For example, Secunia examines the security of computers, software, and software vendors, including such metrics as how many patches are not installed ( Frei2010 ). The most insecure programs and vendors are not who you might think. Not Microsoft: actually some well-known third party software wins that honor. Microsoft has already reacted to its bad reputation by implementing an automatic update system that is widely used. The author when presenting that paper mentioned another example of a software vendor (open source in this case) that had come out poorly in these rankings before, and then (apparently because of that poor showing) implemented a better automatic update system and greatly improved its ranking.

How does the reputation system itself change Internet security?

Placebo rankings for a control group would not be prudent. Fortunately, there is another way. Deploying a reputation system on a worldwide scale will take time, since it needs to have multiple time scales (such as day, week, month), grouped organizationally (ISPs, banks, medical) or economically (Fortune 500), normalized (by addresses, customers, employees), and with derivative rankings such as

plus overall rankings aggregated from some of the more detailed rankings.

Table 1 shows one possible kind of ranking for Belgium, in this case by spam volume (spam message counts) derived from custom data from the CBL blocklist. These example rankings are for all Autonomous Systems Numbers (ASNs) registered for Belgium. The data permits us to dig deeper and find specific types of organizations (banks, medical, etc.) but we do not show that here.

The AS with the most spam volume from Belgium is also the one with the most IP address space, which is no surprise. However, the AS with the second most address space is number 5 in volume, not number 2. Many other factors probably contribute to these rankings, such as the specific IT security techniques, procedures, and processes (infosec) in use at the organization owning the ASN. Traditional infosec if applied well may help prevent or stop botnet infestations, and to suppress inbound spam. Organizations that show up high in such rankings may decide to also do something about outbound spam.

This particular list contains two ASNs for organizations that seem to mostly operate in Africa, not Belgium:

(A third such ASN, Global Broadband Solution Kinshasa (ASN 43256), also shows up in some time periods.)

The RIPE NCC tells us that Uganda Telecom got its ASN directly from RIPE NCC before AfriNIC existed, and Gateway Communications is a Belgian organisation also providing services in Africa.

This leads to some interesting questions:

Which matters most: history, topology, business headquarters location, or some other criterion?

In Figure 1, we can see that towards the beginning of the month the second-highest ASN drops rapidly to fifth place and keeps going down in spam volume. 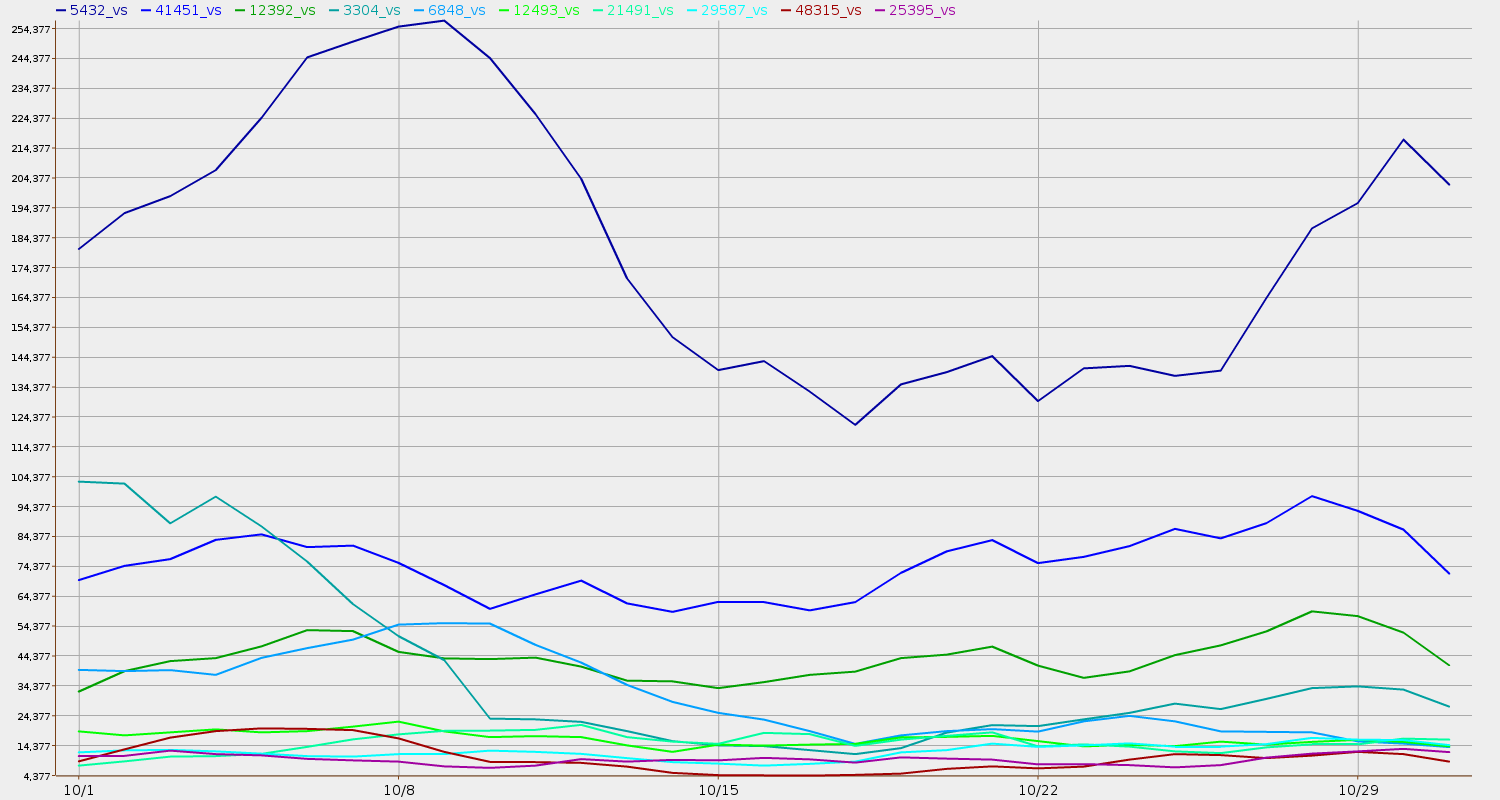 This is why rankings need to be updated frequently. They can change rapidly, and such changes may correspond to changes in infosec (or even changes in pricing) at specific ASNs.

Rankings in the Netherlands

Table 2 shows the top 10 ASNs in the Netherlands by spam volume for October 2010. 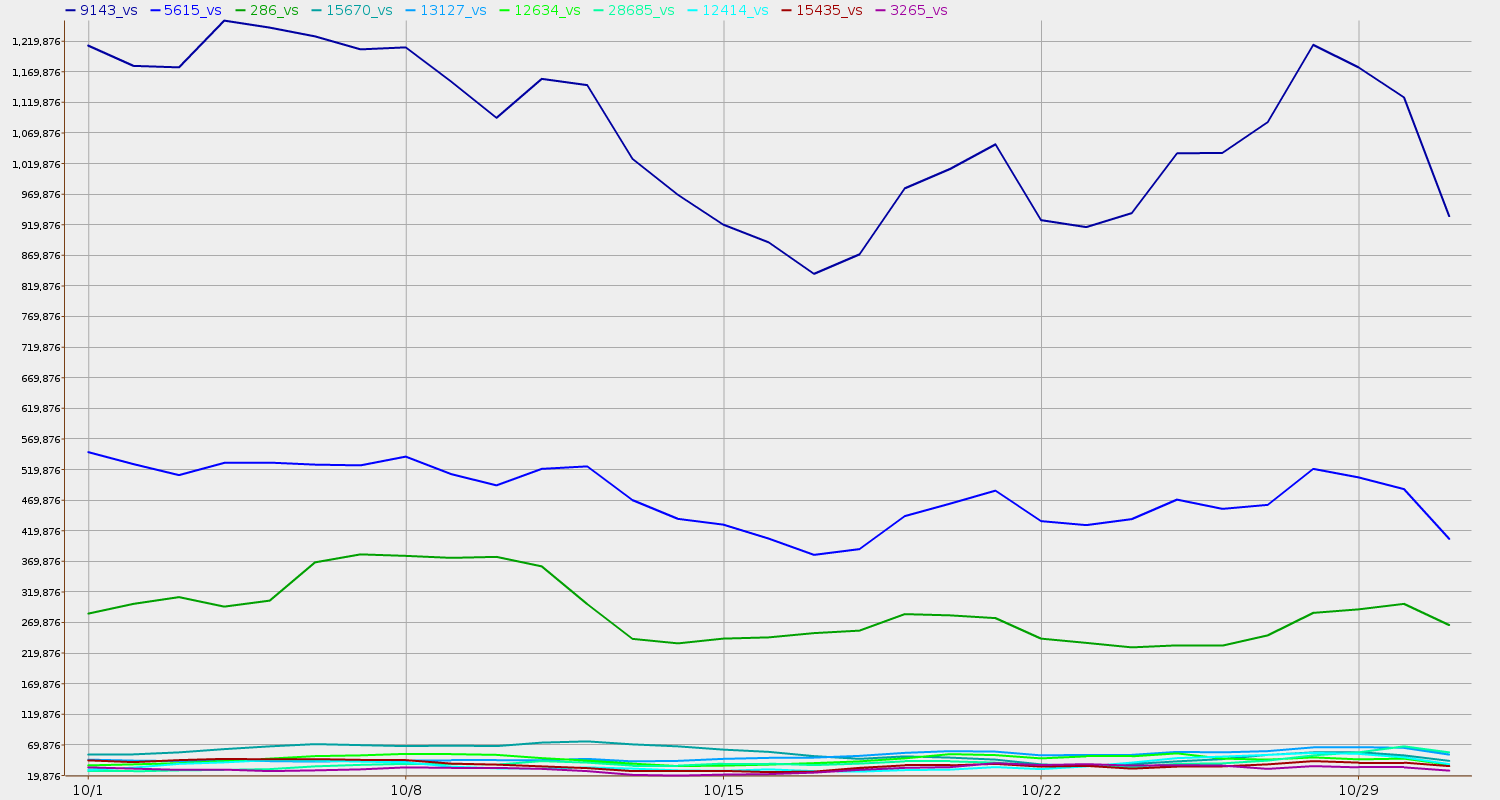 These Dutch rankings don't seem to include any organizations that may need to be ranked in a different region. Or are there? People in the Netherlands may see something in this data that we do not. That's one of the points of such rankings: many eyes to debug the Internet.

The initial rankings deployed for Belgium and later the Netherlands do not have to be all the rankings related to those countries. Each additional set of rankings (by additional organizational types, different normalizations, different derivatives, etc.) is another experimental opportunity, as are later changes to already-deployed rankings, and of course deployments to additional countries.

Some organizations can be invited to participate more directly in these experiments by providing feedback that can help tune the rankings. Some such feedback has already been received: some large ISPs are dubious about rankings purely by volume of spam observed, and would prefer rankings normalized by for example size of address space. That normalization actually favors organizations with very small numbers of IP addresses (probably plus organizations with a few high-volume spammers), so further tuning is needed. This kind of development of appropriate rankings is greatly aided by participation of ranked organizations.

Participating organizations can also engage in a different class of experiments in which the organizations change their infosec and they and the Reputation System Organization (RSO) observe how the rankings change in response. This type of experiment does not require building traditional infosec chains of connections: instead just try something new and see the resulting measurements. Simulations are also not needed: the Internet itself is the laboratory.

To assist organizational feedback and both kinds of experiments, the RSO can provide drilldowns to help the participating organizations determine why they appear the way they do in the rankings. This kind of interaction will help develop drilldown techniques and reports that can be systematized and automated for deployment as drilldown products. Such drilldowns can also be used later by insurers in due diligence before issuing insurance policies, and in claims adjustments.

With access to some external information, further experiments could be conducted. As Ba and Pavlou note ( Ba2002 ):

Outbound spam is an indicator of botnet infestation, and nobody wants higher risk of that. Currently there is very little information publicly available in a digestable form about which ESPs send more outbound spam. So both these two situational factors apply. Thus we would expect some of Ba and Pavlou's hypotheses to apply, such as this one:

To test this hypothesis requires observing ESP pricing for related products (email, hosting, web services, etc.) and seeing if they change with rankings rollouts, or with changes in rankings over time.

Since gathering such information is time-consuming, it would be good to be able to select small samples to work with. This hypothesis could help with that:

So for at least initial experiments, it would be useful to find out which are the most expensive providers and watch their prices.

This would be a long-term set of experiments that would require tuning those hypotheses, accounting for ISPs that prefer to gain market share rather than raise their prices, and other interesting phenomena in the real-world Internet environment. Simply observing price changes would take several months at least. A set of pricing experiments might take years to show any conclusive results as to effects produced by the reputation system. However, price changes are a likely third-level effect to explore after changes in the rankings and changes in infosec.

The Internet itself is our laboratory to conduct experiments to see which organizations change as we roll out the rankings: what flinches and what blooms when we shine a light on Internet security. While the data we are using is specifically about spam, most of that spam comes from botnets, which are implicated in other Internet security problems as well, so these experiments, rankings, and organizational layers should affect Internet security in general. Further, reputation has effects beyond its origin ( Ba2002 ):

“A good reputation, and the trust associated with it, works not only in the market where it is originally generated. Research has shown that trust is transferable (Lewicki and Bunker 1995). Sellers could use an accumulated positive reputation to receive economic advantages in different settings.”

Such a reputation system, and the certificates, SLA self-insurance, and insurance policies that can be built out of it, should provide transparency and economic incentives to help all Internet stakeholders, from banks to ISPs to Law Enforcement Organizations (LEO)s to users, cooperate to implement a much more secure Internet.

We also gratefully acknowledge custom data from CBL, PSBL, Fletcher Mattox and the University of Texas Computer Science Department, Quarterman Creations, Gretchen Phillips and GP Enterprise, and especially Team Cymru. None of them are responsible for anything we do, either.

A Year of SpamRankings.net: Medical Organizations

The Big Medical Drop in SpamRankings.net