A couple of months ago we announced that we were going to redo the IPv6 CPE survey. Based on your feedback, a real survey was released at the end of April 2011. So far we have received over 100 responses. We'll keep the survey open to gather more information, but for now we would like to share some initial results with you.

The results so far

So far, we have received 109 responses to our recent IPv6 CPE survey. This survey is an evolution of some initial work done in the first half of 2010. At that time I was busy rolling out a dual-stack ADSL-based service in the Netherlands. Searching for ADSL modems that support IPv6 wasn't as bad as it first seemed. A lot of vendors had beta versions around, but nobody to test them.

Since then a lot has changed, the uptake of IPv6 is clearly visible with more and more manufacturers adding IPv6 support as a base feature of their products. The number of answers we received also indicate that more and more people are running those devices or are busy testing them.

As every network is unique, be aware that not every device will always give you what you want or expect in your particular situation. In other words: your mileage may vary.  Use this document as a guide, but please do test the device in your own environment before purchasing large quantities. Also don't immediately skip a certain brand or type based on some negative results being reported by others. The situation is changing rapidly at the moment, with some vendors releasing new versions almost every week. So by the time this text has reached you, no doubt some bugs have been fixed (and others introduced).

Also, if you decide to test a device, please take the time to report your results and fill in another IPv6 CPE survey on the device. We are really curious to see how things progress over time, so keep that feedback coming. 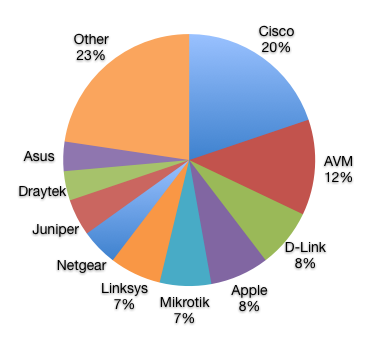 Cisco is still in the lead with a 20% share in this survey, but this is influenced by the sheer number of different products and models they produce. Most of the reports are about the 800-series SOHO router, but we also have users reporting on ASA and 1800 series products.

AVM, a German manufacturer, is in second place. They were amongst the first companies to release an IPv6 capable DSL modem aimed at the residential market. It seems this has paid off with a clear market share amongst the early adoptors.

In the 'big surprises' category, there is Apple. Originally not even included in the list of vendors, there seem to be a lot of users who use their AirPort Extreme to terminate a tunnel and provide them with IPv6 connectivity.

We also see a lot of home-built devices based on Linux or BSD, ranging from full-blown x86 server chassis to small, low-power embedded systems like Soekris. The one that stands out a bit on the DIY-type of solutions is the combination of an ASUS WL-xxx with TomatoUSB firmware. One user comment suggests this might be due to a forum post at HE.net. Another popular solution seems to be the combination of Linksys hardware and OpenWRT firmware.

Is there anything missing? Well, as this is entirely based on community feedback, we can't really say. However, if we have to name one, Zyxel seems to remain a bit of a mystery. They have been included in the original matrix from day one, claiming to have IPv6 capable devices in stores. And on earlier versions there were some comments made by users that suggested they were busy testing such a device. So far we haven't seen a single report of somebody who has tested or is using a Zyxel device.

Most of the respondents indicate they are End Users (75%). Twenty percent claims to be a service provider and the remaining five percent of the responses come from people who are working for a manufacturer. On the question where they got the device, 62% clearly indicated that they got it via a retail channel. Most of the people who indicated 'other' are also a form of retail (Applestore, ebay), and a small portion indicated it is a demo unit (6%). This means that 15% of respondents using an IPv6-capable device got it via their service provider. Still not much, but there are now operators out there distributing IPv6-ready hardware.

We also asked which connection types were supported on the device. The following graph show the responses: 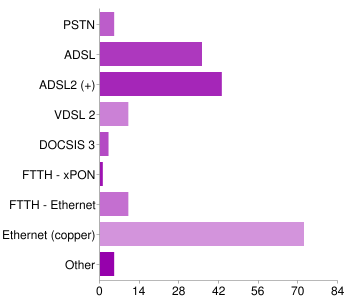 The majority of the CPE around seems to be ethernet to ethernet devices, designed to sit behind the operator supplied modem. Only about 40% seems to be able to plug directly into the (DSL) infrastructure of the carrier. Be aware that most ADSL modems also allow you to use ethernet as an uplink, so there is a double count here.

We also asked which connection type you are using. Ethernet is again a clear winner here with 48% of the users, ADSL(2+) with 43% being the other half of the connections. The remainder are VDSL and three users indicating they plug into DOCSIS 3 directly.

Unfortunately none of the cable users had a native connection, they all say they are running tunnels to get their IPv6. So whether or not there is a device out there that can run native IPv6 across a cable infrastructure remains a question to be answered.

As far as native goes, PPPoE is on top with 59% of the respondents using it as their way to access the Internet. PPPoA and IPoA follow with 17% and 15%. The remainder are RFC1483 bridge connections. Only 21% of the users indicate they are depending on a tunnel for their IPv6 connectivity. This is a bit strange as the absolute counts show that only 36 people say they are not using a tunnel and the rest tick a tunnel protocol on the next question. We have to see how to improve any future versions of this survey.

Of those people who are using a tunnel, almost half (44%) use the classic 6in4 tunnels (like SixXS, HE.net, etc). Eleven percent use 6to4 and there are three users who have a 6RD based connection.

Where do we stand?

Looking at this data it seems that although progress is being made, there aren't many operators who deliver dual-stack connections to their users on a large scale. Most End Users still have to go out and buy an IPv6-capable device themselves and rely on tunnels to get their connectivity.

Based on the responses we got, there is a broad range of products available and they all roughly give the same results. Forty-three percent of the users gave their device an overall rating of 'good', and 38% even rated it "excellent".

If you have to name anything that needs improvement, it is DNS support and firewalls (or packet filters as you may call them). These both have around 15% of the users rating it "poor" or "very poor". With DNS this might be influenced by a bit of an information vacuum; over 40% of the users answered "don't know" on the DNS-related questions.

With firewalls there is a clear distinction between the more professional units and the models aimed for the residential markets. Most of the residential devices come with an enabled filter that mimics the behaviour of standard IPv4 NAT, blocking incoming connections by default. The more upmarket versions usually behave like a router and do not do any filtering by default.

The exception to these of course are the dedicated security appliances (Netscreen, ASA, etc). As lack of IPv6 support in firewalls was and still often is heard as an argument to delay deployment. I am actually quite surprised by the number of responses we got on those dedicated security appliances and even more surprised that a lot of people are using such a device to enable IPv6 access (mostly tunnels).

A lot is moving and it is moving fast. More and more vendors are releasing IPv6-ready devices and firmware. The overall feedback seems to indicate they are doing a reasonable job at it. Some bugs still appear, of course, but we also received various responses indicating these were fixed in later versions.

If there is any advice to give, it's this: always try and run the latest available software and when buying equipment, make sure you have access to new releases which will no doubt come sooner than later.

As far as the survey goes, keep that feedback coming. Please tell us if you like this kind of reporting. We are planning to publish the actual numbers, but these have to be processed some more before they can be published. The relatively low number of responses received so far does influence the results on certain topics. So, please only report on devices that at least claim to support IPv6.

Once again thanks for participating!

The Future of the IPv6 CPE Survey - More Input Needed

I got a ZyXEL -- I'll make work of submitting a report.

Thanks for the feedback. As described in an earlier post, we wanted to gather some more substantial feedback first. Once we feel we have enough data, we will see how we can best present it in form of a table.

according to the survey report, it is a long way to go for IPv6.<br />A lot of people still use the DIY-BOX (ASUS with OpenWRT should be counted to DIY Box).<br /><br />I think we should make the survey for the commercial products that real sell on the market.<br />&nbsp;

Thank you for paving the way and centralising this info

Thank you for that survey results. However, could you provide information about the cost for ISPs and End-users to upgrade their CPE to IPv6 firmware?