Last year, in a series of two articles, we presented statistics on the number of RIPE NCC members and the resources distributed to our members. With twelve months passed, we revisit the topic and look at how things evolved in 2010.

Last year, in a series of two articles, we presented statistics on the number of RIPE NCC members and the number resources distributed to our members. With twelve months passed, we revisit the topic and look at how things evolved in 2010.

Figure 1 shows the age distribution of the RIPE NCC membership. As before, each bar represents the number of members (also known as Local Internet Registries or LIRs) who signed the contract to become a member in one specific quarter. Inside each bar, the different colors indicate the present status of membership: active (yellow), pending closure (orange) or closed (red). Growth continued to be strong in 2010. The number of members who signed up in the last quarter is almost as high as in the second quarter of 2008, before the start of the financial crisis. During the year 784 registries signed up. However, because of mergers and bad debts, a number of existing LIRs had to be closed. By year's end the net growth resulted in a total of 7167 active members. 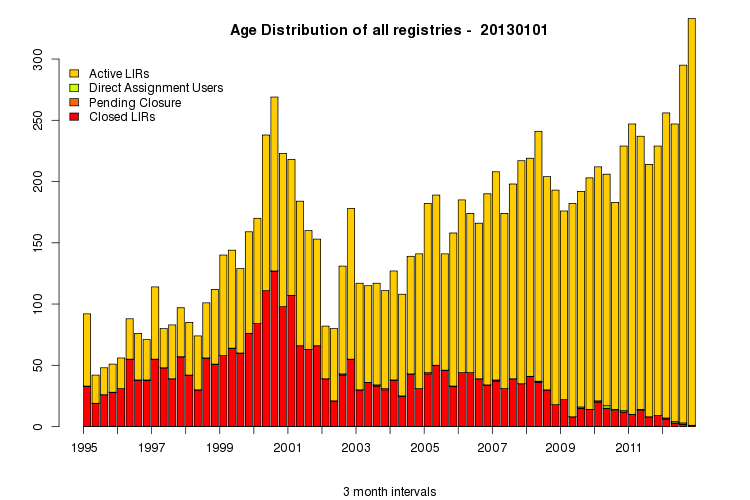 In the top 10 of countries, not much changed. Russia still has the largest number of members. France passed the Netherlands and is now 5th largest.

With unallocated IPv4 addresses nearing exhaustion, it was good to see the number of IPv6 allocations continued to grow exponentially in 2010. A total of 834 new allocations were made, compared to 554 in 2009. Figure 3 shows demand for IPv6 addresses was especially high in the last three months: 344 of the 834 allocations were made during this time. 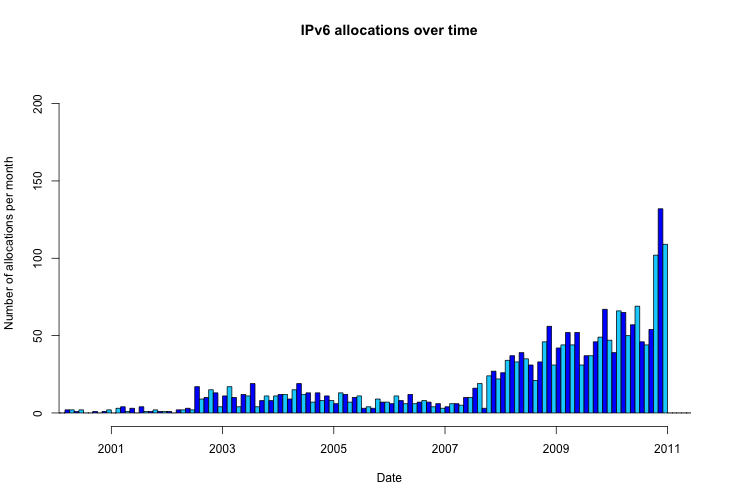 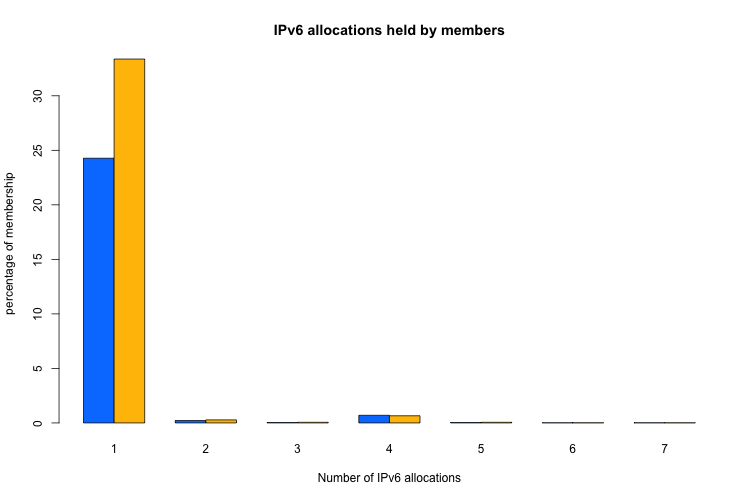 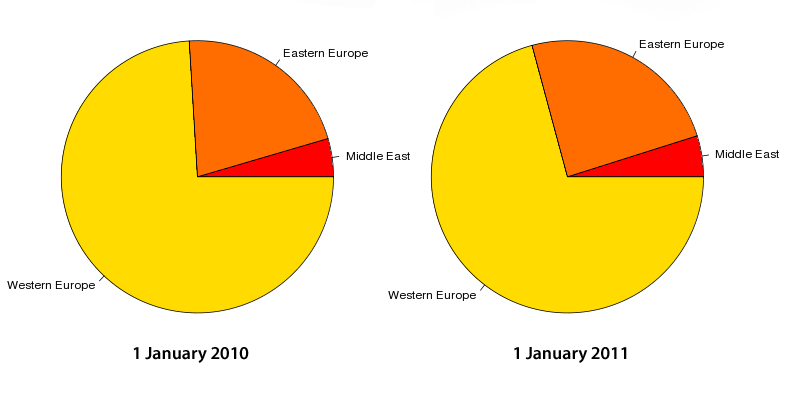 Figure 6 shows the rate of IPv4 allocations continues to grow. Ever since 2002, there is an upwards trend in the number of IPv4 allocations per month. All-time highs were set first in November and then in December 2010. The news of IANA's unallocated pool dropping below 5% in October 2010 may have prompted a number of LIRs to speed up their requests for IPv4 address space. 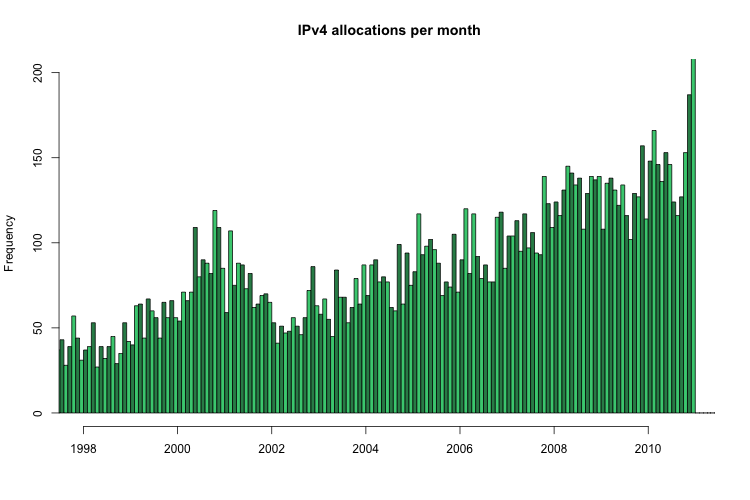 
In contrast to the number of IPv4 allocations, the total IPv4 address space allocated per month had started to show a downward trend in recent years. In the first three quarters of 2010 growth rates have stablised. But November and December 2010 broke with that trend. As you can see in Figure 7, the equivalent of almost one /8 (16 million IPv4 addresses) was allocated in just these two months. 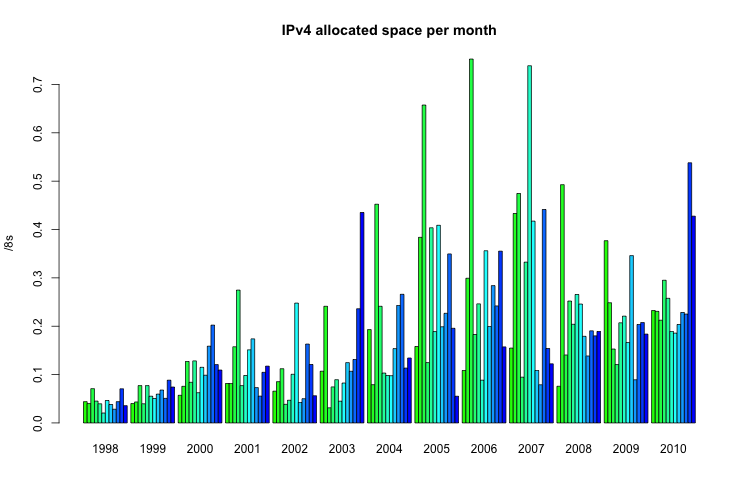 Last year we noted that, compared to the geographical distribution of the membership, Eastern European LIRs make more than the average number of direct IPv4 assignments to end users. This trend continued in 2010. Figure 8 shows how the individual assignments were distributed over the various countries on 1 January 2010 and on 1 January 2011.  As we can see, Ukraine, Russia and Poland all passed the United Kingdom. 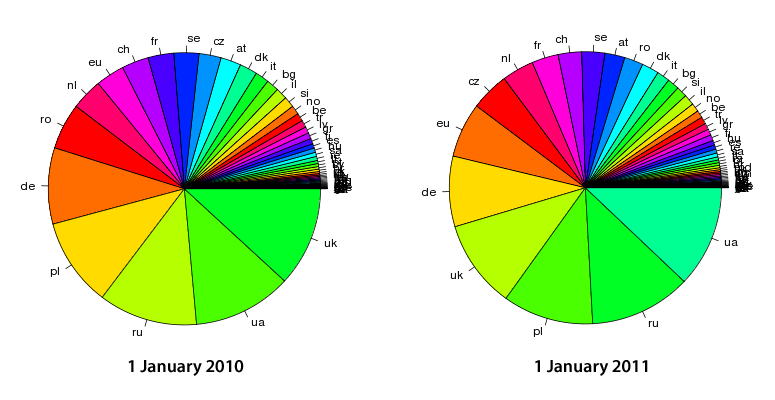 Like allocations, the number of IPv4 assignments per month shows, on average, a steady growth. But the peaks in November and December 2010 are not that much higher compared to the longer term trend. 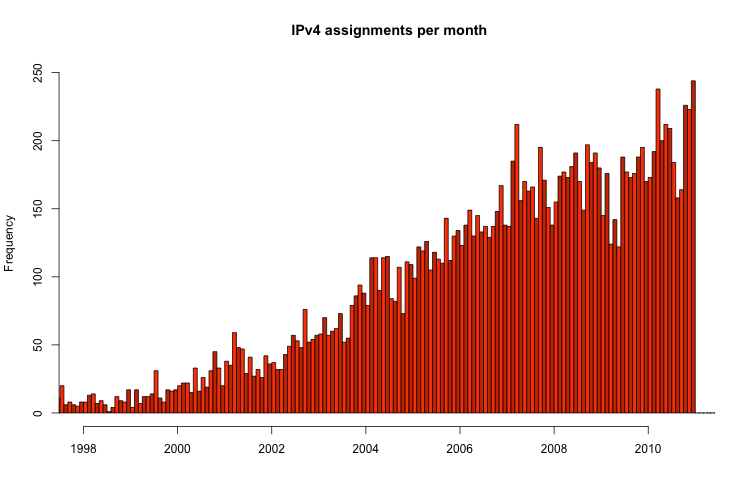 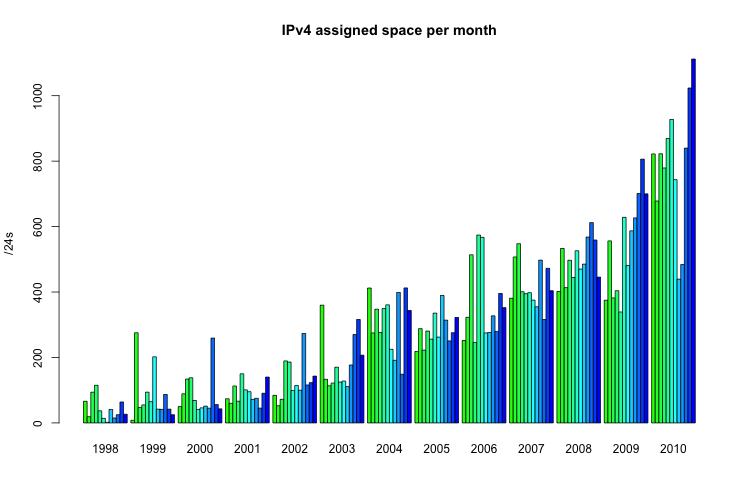 After a number of years of steady growth, assignment rates of AS numbers appear to be leveling off. Figure 11 shows wide fluctuations from month to month, but on a longer time scale these average out. 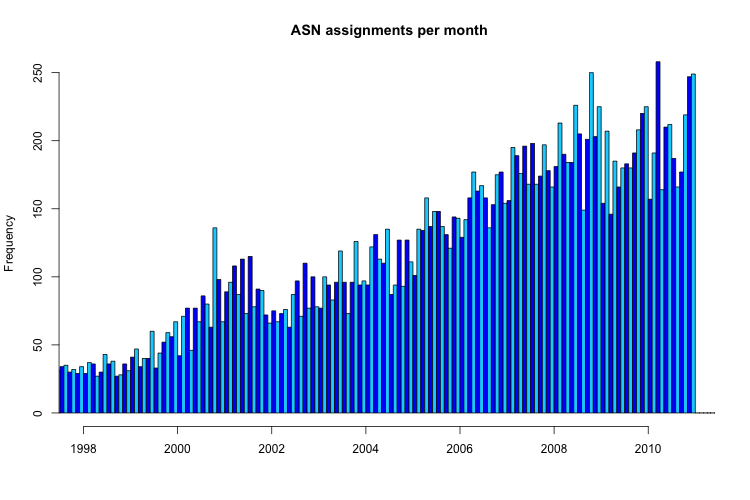 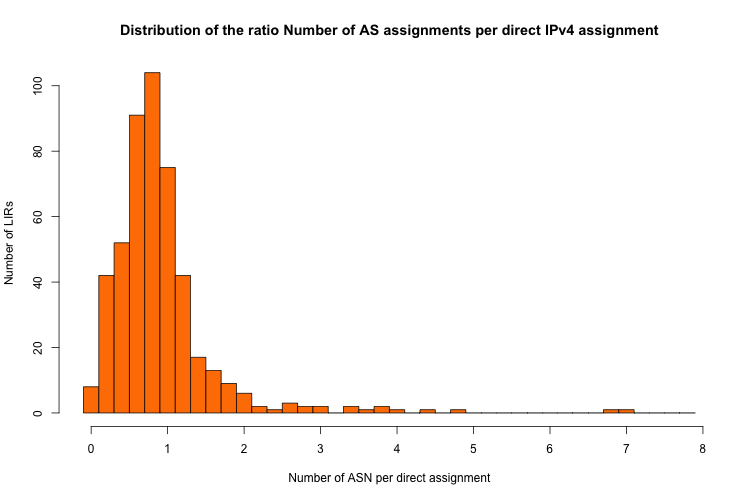